Our CEO Sajda Mughal reflects on surviving the 7/7 bombings in London, 14 years on from the attacks and speaks to the Evening Standard about her the experience.  This terrifying, life-changing experience led Sajda to commit the JAN Trust to finding community-led, grassroots solutions to extremism and radicalisation. By empowering and educating women through pioneering programmes such as Web Guardians™, the JAN Trust continues to make progress on these important issues. We remember the victims of the attacks and others impacted by 7/7, and will carry on working against hate and extremism.

Watch the interview and read the article below or here: 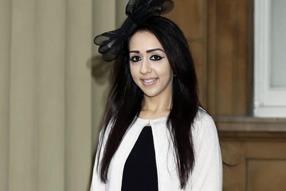 Survivor: Ms Mughal says she still has nightmares 14 years on.

A survivor of the 7/7 terrorist bombings has told how she still has nightmares about the atrocity 14 years on.

Sajda Mughal was a passenger on a Piccadilly line train targeted by one of the four terrorists in the 2005 attacks, which claimed 52 innocent lives and injured 700 people.

Ms Mughal, who was 22, turned her back on her “dream career” in the City and now works to stop young people being drawn into extremism. She spoke out after police and civic leaders attended a memorial service in Hyde Park yesterday to remember the victims.

Ms Mughal, pictured, said: “If I’m honest — 14 years on — I still find things difficult. For instance travelling on the Tube. I rarely do it. When I do get on the Tube I have to get on that Piccadilly line and it brings it all back to me.

“Year-on-year my husband, then boyfriend, says to me you had nightmares, you were screaming in your sleep and saying things about 7/7.

“Even though it’s 14 years on, it still affects me and if I’m truly honest it will affect me and I will remember it for the rest of my life. It’s not something I can forget, seeing what I saw and hearing those screams.”

Ms Mughal, the only known Muslim 7/7 survivor, said discovering that the attack had been carried out by four Muslim men “really knocked me back … Finding that out really affected me even more.”

She quit her job at an investment bank and became director of the JAN Trust, a charity which supports marginalised women and raises awareness of issues including counter-terrorism.

She said: “I turned my back on my dream because I knew something had to be done.”

Sajda Mughal: Stay silent – or do your job and risk losing access and funding
Our CEO, Sajda Mughal OBE, wrote in Third Sector about the impossible choice the government is forcing charities to make between appeasing the government and doing their jobs of advocating...
29 Likes
Sajda Mughal: BAME-focused funding must continue to grow after the pandemic ends
Our CEO Sajda Mughal wrote in Third Sector about the obstacles confronting BAME-led organisations and increasing funding for organisations to truly tackle issues faced by BAME communities. Read more here...
66 Likes